I didn't know my old science teacher was the drummer for Cheap Trick.

Rick Nielsen developed the 5 neck guitar, but did you know that bassist Tom Petterson came up with the idea of the 12 string bass guitar? It really helps give the band a thunderous sound. Add in the machine gun drumming of Bun E Carlos and the great rock vocals of Robin Zander you get one hell of a band

Bonus: Rick shredding to open up a great great of "Aint That a Shame" 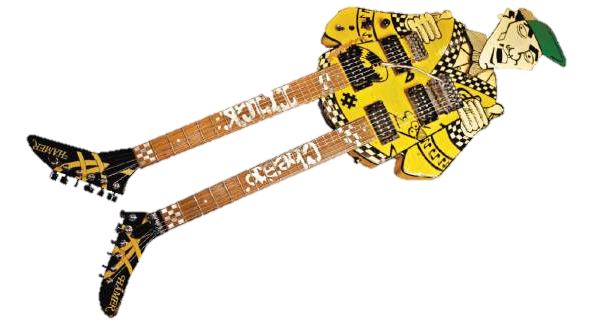 Live albums get some deserved and undeserved derision. Usually they are obligatory, just a one off to fulfill a contract obligation and they rarely capture what it's like "being there." In addition almost all live albums have the crowd noise artificially inserted, vocals are fixed, and sometimes guitars are augmented in studio. On the other hand, where else but a live album are you going to hear a 20 minute version of Cowgirl in the Sand?

Kiss Alive! is famous for probably being barely "live." The some reports are the only actual live parts are Peter Criss' drums.

I bring this up because this past weekend was the 40th anniversary of Cheap Trick playing at The Budokan theater in Japan. Cheap Trick Live at Budokan was originally suppose to be a Japanese only album but it sold many imports that it was eventually released stateside in February of 1979. The original album was only about 1/2 the concert and eventually Cheap Trick released the rest of the concert in a second album and then the whole show (actually it's from two different concerts two days apart). I have take both Budokan I and II and rearranged the songs according to the set list. I still love this album and listen to is every so often.

2 September 1945: Combat ends in the Pacific Theater. The Instrument of Surrender of Japan is signed by Japanese Foreign Minister Mamoru Shigemitsu and accepted aboard the battleship USS Missouri in Tokyo Bay.