Pitcher Dave Barnhill was a four-time all-star in the Negro Leagues.

Pitcher Leon Day was a star in the Negro Leagues, primarily with the Newark Eagles.

Dave Leeper was drafted by Minnesota in the third round in 1978, but did not sign.

END_OF_DOCUMENT_TOKEN_TO_BE_REPLACED 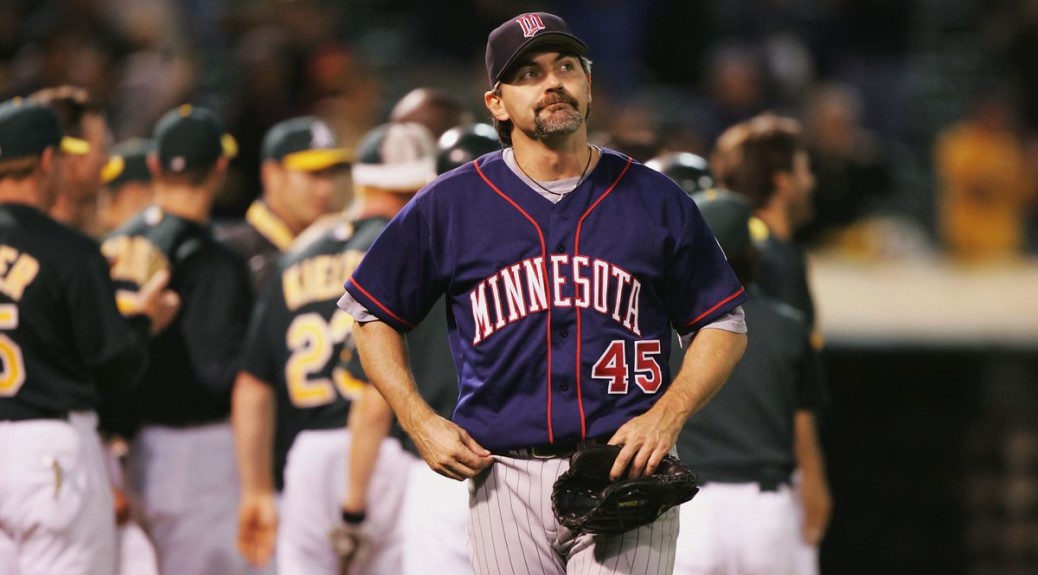 Batting stars:  Torii Hunter was 2-for-4 with a home run (his fourteenth) and a double.  Michael Cuddyer was 1-for-2 with a double and a walk.

Opposition stars:  Aaron Sele pitched seven innings, giving up three runs on five hits and two walks and striking out one.  Garret Anderson was 4-for-5.  Josh Paul was 3-for-4 with a double and two runs.  David Eckstein was 1-for-3 with two walks and two runs.

The game:  The first two innings passed by quietly.  Then in the third, Tim Salmon and Paul singled and Eckstein walked, loading the bases with none out.  Chone Figgins was retired on a short fly ball, but Anderson and Vladimir Guerrero each hit an RBI single and a sacrifice fly made it 3-0.  The Angels had another big inning in the fourth.  Robb Quinlan singled and scored from first on Paul's one-out double.  Eckstein followed with an RBI single.  With two out Anderson singled, an error loaded the bases, and Jose Guillen delivered a two-run single to make the score 7-0.

The Twins offense had done very little to this point, getting only one hit through the first four innings.  Hunter changed that with a home run to lead off the fifth.  Corey Koskie had a one-out single, Matthew LeCroy walked, and with two out Shannon Stewart singled home a run to make it 7-2.

That was as close as the Twins would come.  Each team scored a run in the seventh, but neither threatened to put together a big inning.  The Twins took an 8-3 defeat.

Notes:  Justin Morneau had only recently become the regular first baseman with the trade of Doug Mientkiewicz.  Stewart had injury problems in 2004 and was the DH in this game, with Lew Ford in left field.

Jason Bartlett was at shortstop in place of Cristian Guzman.  This was the second major league game and first start for Bartlett.  He would be sent down after the game, but would come back as a September call-up and would begin 2005 as the team's starting shortstop.

Mulholland pitched just 3.2 innings, allowing seven runs (five earned) on nine hits and a walk and striking out one.  It was not his worst start of the season--that would come on August 26, when he would again allow seven runs in 3.2 innings, but all the runs would be earned.  He was forty-one, and was really not a good pitcher anymore.  He really hadn't been very good for some time, but teams kept sending him out there.  I assume it was a case where, as Bill James once put it, he would pitch well just often enough to fool teams into pitching him some more.

Despite Sele's 7-0 record, he didn't have all that good a year.  At this point he was 7-0 with an ERA of 4.60.  He would finish 9-4, 5.05, 1.62 WHIP.  He started his career well, but after 1995 he only had one season with an ERA of lower than 4.20 and six seasons with an ERA of over 5.00.  Despite that, he pitched until he was thirty-seven and had a fifteen-year major league career.  It's always amazing to me how some guys keep getting chance after chance, long after they've proven they're not good enough, and other guys dominate AAA and at most get one brief shot.

The Twins had won four in a row and eight out of nine coming into this game.

The Angels were 58-50, in third place in the American League West, three games behind Texas.  They would finish 92-70, in first place, one game ahead of Oakland.

Another easy win for our boys.

END_OF_DOCUMENT_TOKEN_TO_BE_REPLACED

One down, one hundred fifty-nine to go!