...our most recent nightmare of a season is ending. A guy I've never heard of is doing the catching, which should tell you how engaged I've been. Ubaldo faces Scott Diamond. The Indians have won nine in a row and I can't imagine they'll be taking this opportunity to lose, what with that whole Wild Card going on. The Indians fought their way into the field but now might even host the play-in game against the Rays or Rangers. How long has it been since the Central pulled down a Wild Card spot? 2006, maybe? I should probably know this, but I'm not sure.

Anyway, I suppose I'll at least turn this on while keeping an eye on other games. They're the only Twins we have, and this is it for six months.

Thanks for another season, guys. Let's win this one to improve upon last season! If these trends continue, this team could be competitive by 2025.

The Twins meet the Jays once more after a week or so of moving in opposite directions. Scott Diamond goes for the Twins, and I sure as heckfire do hope he's not ruined after his injury. The Jays start something called Todd Redmond, who has four appearances in his life, and just one start (not this year). He was mildly serviceable as a starter in AAA, having two meh years in 09-10, a nice year in 11 and an okay year in 12. I can't imagine he projects to be a long-term starter in the majors, but hey, I'll root for him starting after this game. 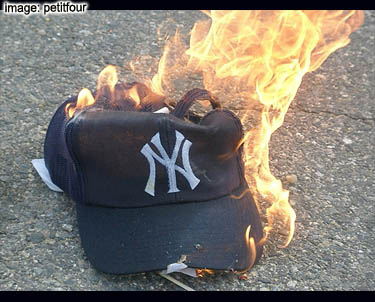 I had a pretty nice game log all ready to go today, but we won't be using it because it's on my laptop. I'm writing this on my backup PC, which I built about the same time that Gardy took over as manager of the Twins. It's slow. Painfully slow. Matt LeCroy slow. Sloths laugh at things this slow. But it's all I've got until I can eradicate the apparent malware that has basically bricked my laptop.

The Twins open a 4-game series tonight against the team we all love to hate. The Yankees send 41-year-old Andy Pettitte to the mound. We know what he can do. He's beat the Twins in his last seven starts against the hometown nine. The Twins counter with Scott Diamond, who has struggled in has past few starts while posting a 1-3 record since June 2nd. But for once it actually feels like the Twins match up pretty well with the banged-up Bombers sans ARod and the Cap'n. We'll see. There was a lot going on at the Maimi game last night. At least in the video it looked like the Marlin's play in the Hooters of the MLB. Whatever, let's get this one today. GO TWINS!

The Twins have somewhat gotten well lately against bad teams, and are up to an unimpressive-but-not-like-the-past-two-seasons 24-29. Bonderman last pitched in 2010 and is returning from multiple surgeries; normally I'd like a story like this to start with a happy comeback, but that can wait a game, right?

I'm going to link to the WGOM 2013 Predictions Spreadsheet since we'll be exactly one-third of the way through the season after this game. For the division winners, I highlighted any pick that is currently on track for the playoffs. For the wild cards, the darker yellow shows that both picks are on track while the lighter denotes one team is correct.

MOST DIVISION WINNER PICKS HEADED TO PLAYOFFS
spookymilk (4). I needed to find a way in which I looked like I was ahead.

Does anyone see any other fun stuff there? I didn't do updates on the rookies since many haven't joined the big club and it would just lead to depression over Hicks's opening month. I didn't look at MVPs either, but that's mostly because it would take a while. I'm happy with my Upton pick, though.

i'm really every other week terrible at this game log thing, eh?

Anyway, the Twin's ace gets the start today against some guy who I'm told is making a spot start. Hopefully, that bodes  well for the Twins offense.

Well, they're back in last place again (then again, in the rough and tumble AL Central, that's not as bad a thing as it might otherwise appear).

After golf on Thursday, a group of people were sitting around talking about baseball, when the subject of Joe Mauer came up. I was expecting the worst, but the near universal consensus was that we're watching a Hall of Famer do Hall of Fame-y things. The couple dissenters were looked upon with a sort of cocked eyebrow pity. I got the sense that maybe all isn't lost. There are people - even those who aren't so statistically inclined - who can see that Minnesota's in the midst of watching one of the very best to ever play his position.

Those that can't see that? Well, they can choke on their own tongues when Joe is inducted into the Hall of Fame as they lie and say they were with him every step of the way.

* I would expect (injury excepted of course) Fien to be high on this list at season's end.